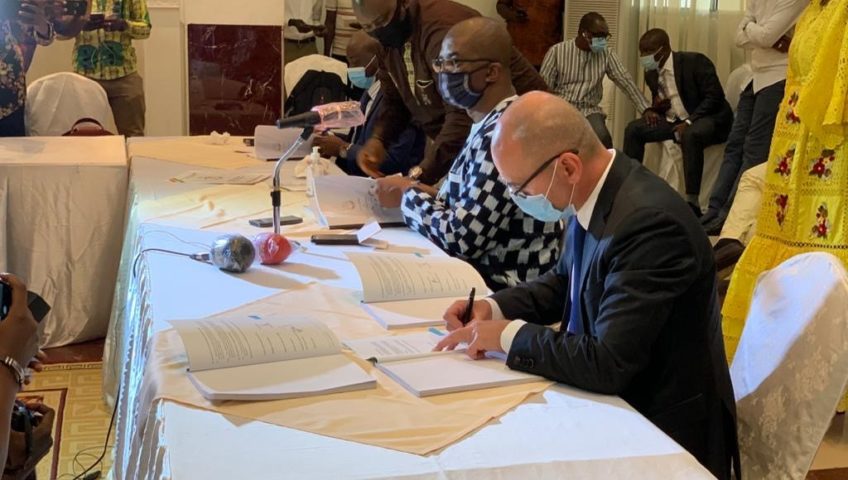 Conakry (Guinea), June 9, 2020 – Following the approval in the Council of Ministers of the Government of the Republic of Guinea on Thursday June 4, 2020 to sign the basic agreement for the exploitation of iron ore deposits of the blocks I and II of Simandou, the SMB-Winning Consortium and the Guinean government today signed the basic agreement for a period of 25 years at the Ministry of Mines.

The ceremony took place in the presence of the Minister of Mines, Mr. Abdoulaye Magassouba, the Minister of Budget, Mr. Ismael Dioubaté, as well as Mr. Fadi Wazni, Chairman of the Board of Directors of the SMB, Mr. Frédéric Bouzigues, General Manager of SMB, Mr. Ismael Diakité, Deputy General Manager of SMB and President of the Chamber of Mines of Guiné, as well as Mrs. Jiang Xiaobei and Mrs. Molly Zhao representing Shandong Weiqiao and Winning International Group. Also present were the economic representative at the French Embassy, ​​Mr. Loïc Peringuey, the economic and commercial advisor at the Embassy of the People’s Republic of China in the Republic of Guinea, Mr. Wang Baozhong, as well as many partners project techniques such as Total, PwC, the Société d’Expertise Environnementale et Sociale (SEES), Louis Berger, and Société Générale de Banque en Guinée (SGBG).

For the development of this deposit, a tender procedure had been organized by the Ministry of Mines and Geology for the allocation of mining rights on the iron ore deposits of blocks I and II of Simandou. As part of this call for tenders, the SMB-Winning Consortium was accompanied by the law firm August Debouzy and the audit firm PwC. Following this procedure, the SMB-Winning Consortium was declared provisional successful tenderer on November 12, 2019 against the Australian company Fortescue Metals Group (FMG) after the examination of the candidacies by an interministerial commission and several independent cabinets mandated by the government of the Republic of Guinea.

Within the framework of the exploitation of the deposits of blocks I and II of Simandou, the SMB-Winning Consortium undertakes to export its ore via Guinean territory, in particular by constructing a railway track of approximately 650 kilometers, as well as a multimodal port platform at Matakong in the prefecture of Forécariah on the Guinean coast. In parallel, the SMB-Winning Consortium also intends to create an agricultural growth corridor along the railroad as well as build a steelworks in partnership with other operators once the feasibility studies have been validated.

The entire project brings the Consortium’s investment to an estimated $ 15 billion, including $ 6 billion in equity investments. Beyond the numerous spinoffs in terms of direct and indirect jobs as well as local purchases, the Ministry of Mines and Geology estimates that direct state revenues will be in the region of $ 15.5 billion. US over the term of the agreement.

In terms of timetable, the Consortium has planned an immediate start of studies and research work to present a feasibility study to the Guinean State within 30 months of the date of entry into force of the agreement. Construction work on the mine will begin immediately after the feasibility study is validated and first commercial production will be reached within 74 months.

Since its creation in 2014, the SMB-Winning Consortium – formed by the Singaporean shipowner Winning Shipping, the Chinese aluminum producer Shandong Weiqiao, the French-Guinean transport and logistics specialist United Mining Supply (UMS), and the Yantaï group Port – has become Guinea’s leading exporter of bauxite, with 42 million tonnes produced in 2018. SMB employs 9,000 people in the Boké region and has built two river terminals – Dapilon and Katougouma – attached to the port of Boké. The design of the industrial project of the Consortium takes into account the environmental and social context throughout the chain of operations, and relies on benchmark companies like SEES and Louis Berger to define its CSR policy while collaborating with Guinean NGOs and international.

While it has already invested nearly US $ 1.5 billion in its activities in the Boké region, SMB has also launched the Boffa-Boké Project, including a 135 km railway line in a corridor s extending the Dapilon river terminal to the new mining areas of Santou II and Houda, as well as a future alumina refinery in the Boké region. The total investment in the entire Boffa-Boké Project by the Consortium is estimated at US $ 4.5 billion.

For Mr. Sun Xiushun, Chairman and CEO of the Consortium: “By signing this agreement in a pandemic period and in the midst of a contraction in the world economy, the SMB-Winning Consortium sends a strong signal to the Guinean people about their willingness to invest in the long term in Guinea. It’s a sign of trust from the Guinean stakeholders that we are honored. ”

“Faced with the pandemic, we have a double objective: to guarantee the health security of employees and communities while maintaining activity,” explains Fadi Wazni, Chairman of the Board of Directors of SMB. To carry out this gigantic project, we need everyone’s help: our shareholders of course, our managers and employees, the administration and the communities. We apply this logic to all of our major projects, that of an inclusive approach which gives an important part to everyone’s adherence to our development model. ”