A true partnership for the shipping of bauxite 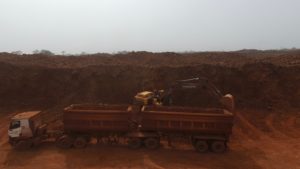 Through their enthusiasm, their interest in a common project, they mobilized their teams and pooled their resources in a consortium of companies for a rapid development model.

It is a consortium of 3 shareholding companies, integrating the Guinean State as 4th shareholder with 10% of shares, as is regulated by the Mining Code of the Republic of Guinea.

To carry out this tremendous economic and human adventure, the 3 companies have mobilized the necessary resources for the realization of a project of this scale.

By adding to this the undeniable expertise of Yantaï Port Group in the construction of port logistics platforms, you obtain the logistics chain allowing the export by the SMB WINNING Consortium of Bauxite from Guinea to China.

The project began in 2014 in a non-cadastral and unexplored area, where SMB geologists have identified our first bauxite reserves, an area less than 30 km from the northern shores of Rio Nuñez, which hinted to ideal evacuations solutions.

On January 19, 2015, the SMB obtained its research permit, leading for 6 months its Environmental and Social Impact Studies and presenting in June its feasibility study, obtaining on July 7, 2015 its export license.

On July 20, 2015, the first ton of bauxite departed from the Katougouma river terminal, opening the door to our target of 15 million tons in 2016.

On March 16, 2016, the SMB obtains new research permits on the Dabiss area, for which, in December 2016, 2 exploitation permits are issued.

On March 13, 2017, an industrial mining license was issued for the area of Malapouya, in the prefecture of Boké, on an area of 146 km².

In parallel with the mining activities themselves, the SMB WINNING CONSORTIUM, after laying the foundation stone of a second river terminal at Dapilon in April 2016, sent a first barge from this terminal for export. ore to China in October 2016.

To date, 2 river terminals are operational and thus increase the export capacity of Guinea bauxite to 50 million tons per year.

It is an Integrated Logistics model, starting with the day-to-day management of site resources, which are transported by trucks on exclusive mining roads, leading to the terminals built on the banks of Rio Nuñez in Katougouma and Dapilon.

Loaded on barges of 8,000 tons each, the bauxite carries out its second voyage, fluvial this one. This time, to reach at sea the ships of our fleet.

It is loaded with transhipment cranes and exported to China, joining the CHINA HONGQIAO Group’s refineries.

Here are some figures : 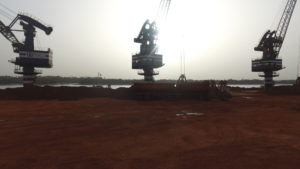 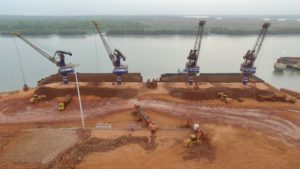 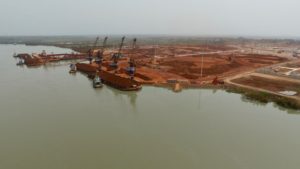 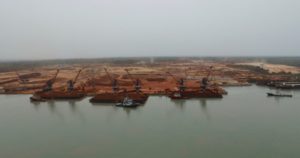 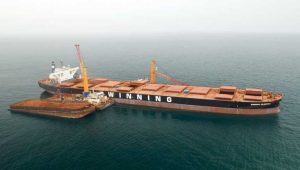 These infrastructures, some of which in the Boké Special Economic Zone, also allow operational pooling for an increase in production and annual export of Guinean bauxite.

Thus, on June 14, 2017, the SMB and the French company AMR (Alliance Minière Responsable) signed a partnership agreement, production agreement, aimed at making Guinea the leading exporter of bauxite in the world and increase its production capacity to export better quality bauxite at a more competitive price.

Three major consequences resulting from the agreement: make Guinea the world leader in bauxite production; strive to respect and improve the working and living conditions of employees and local populations; give France the opportunity to be at the heart of the global aluminum production sector.

To succeed in making such a development model, the SMB has to highlight the values of the shareholders and CONSORTIUM SMB WINNING.

These values and intentions thus give rise to an economic model that contributes to Guinea’s growth every day, making CONSORTIUM SMB WINNING an eco-citizen group.

In harmony with the EITI, the SMB subscribes entirely to the regulations in this area, without any exemption and tax vacancy.

And as a support in the different stages of declarations of our extractions and exports, but also for all the regulatory processes applied to an extractive company, the SMB WINNING CONSORTIUM has attached the services of the 2 largest companies present in Guinea, recognized global specialists:

As a citizen group, and putting forward its social responsibility every day, the SMB WINNING CONSORTIUM is involved in community development in the geographical area of its project.

For this purpose, the SMB WINNING CONSORTIUM has proceeded since its installation to the payments of compensations calculated for the reimbursement of goods and people impacted by the work of the project.

So far, US $ 7.5 million has been repaid to communities as part of the Compensation Action Plan.

The SMB WINNING CONSORTIUM and the actors of the whole project work every day to improve the living standards of the populations present with us on the ground, affirming its declared commitment from the first day of its installation, creating a better environment for the wellbeing and the harmony of the relations between all.

Two schools have already been built in Kaboye and Kampatè districts.

In Katougouma, a training center that welcomes nearly 380 young people was initiated. The aim is to immediately give young people confidence in themselves and the opportunity to apply for jobs in the project, by giving them the necessary foundation to face the job market.

The health infrastructures were not omitted, since in 2015 the Consortium built 2 health centers, equipped them and put at the disposal of the services of the Ministry of Health, for the improvement of the living conditions of the population of Boké region.

These infrastructures, schools, training centers and health centers, thus made available to the population, have been entirely financed by the Consortium.

The establishment of a SCAD center in Boké to train 500 young people per year is also under study, as well as a school of the Navy on the extension of Dapilon and “program talents” between Guinea and Senegal. China, a major exchange platform for the training of national executives for the project. 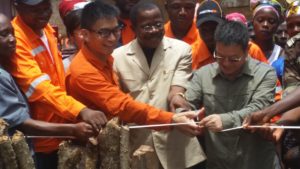 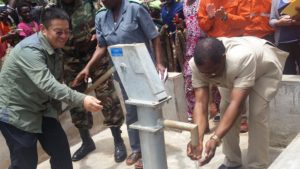 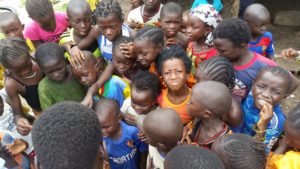 Result of the common will of the 3 shareholders of the Consortium, formalizing the initiative and the will of our group to promote acts of mutual aid and solidarity, by participating in the social, economic and cultural development of Guinea, Africa and the World, we created the SMB WINNING CONSORTIUM Foundation on July 07, 2016.

The SMB WINNING CONSORTIUM Foundation‘s mission is to promote and support Guinean cultural projects, to give a major role to culture in Guinea, to participate actively in local and community development, to initiate and promote cultural activities. mutual aid and solidarity.

The role of the SMB WINNING CONSORTIUM Foundation is to explore new avenues alongside associative and institutional actors. Creating new alliances with committed actors and supporting citizen initiatives means being closer to the field, more efficient and more generous.

Promote the development and autonomy of young people through access to education.

To make the Guinean culture shine, to widen the access to the culture and to the artistic practice, vectors of education and social cohesion.

The SMB WINNING CONSORTIUM Foundation is committed to assisting local communities to provide health care, by building a dispensary, by setting up vaccination plans in the Boké region …