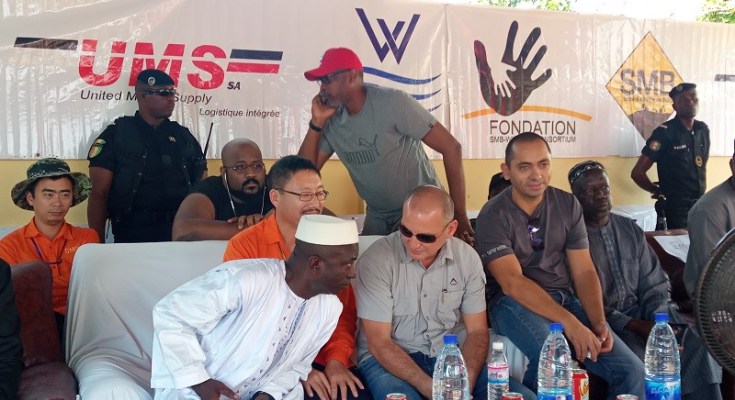 FADI WAZNI, PCA of the SMB, was greeted on the morning of Thursday, November 1st, 2018 with fanfare by the youth of the sub-prefecture of Kolaboui located 22km from the capital of Boke Prefecture.

It was to respond to the invitation of the young people of Kolaboui that UMS CEO, Mr. Fadi Wazni, made this visit on the morning of Thursday 1st November. The first of its kind, this visit symbolizes and materializes the relations of cooperation and good cohabitation linking the neighboring communities to the projects of the Consortium.

In order to reduce the migratory flow, poverty and develop income-generating activities in their locality, the young people of Kolaboui, through the voice of their spokesmen, Mohamed Lamine Kéita and Djénab Kéita, formulated the issue of employment and training, the rehabilitation of schools, the cultural center and the football field, the rehabilitation of the crossroads, support for the development of agriculture for women, and the creation of a microcredit fund was mentioned.

For his part, the delegate of the Federation of market gardeners of Kolaboui, Idrissa Diassy, pleaded for the provision of revolving funds and the installation of a cold room to allow women to fight efficiently against unemployment and poverty in households.

In the name of the notabilities, the Patriarch of the CR of Kolaboui, Amadou Coumbassa welcomed the visit of Mr. Fadi in his geo-traditional sphere before calling the CEO of the Consortium in relation to the state of very advanced degradation from the Kolaboui crossroads.

Visibly satisfied with the reception he received, Mr. Fadi Wazni said: “None of your requests outrages me. All that has been asked here will eventually happen. We are not condemned to underdevelopment. This is History’s path. Infrastructure, and especially ports, are what allow the development of a country or a nation. But for us to develop those, we need peace, agreement, understanding and better organization to better benefit from development. ”

Speaking of the School of Trades, which is an entire problem, Wazni said, “Training and employment go hand in hand. So a priority for his company. ”

In relation to the planning of the plains for the empowerment of women, he invited the administrative authorities to identify areas and set up management committees before promising to announce a personal contribution of 100 million francs Guineans for a start. One way to help women in Kolaboui to undertake income-generating activities.

For the youth, the CEO of the Consortium has described as a priority the study of the construction of a football field and a cultural center.

In his agenda, Mr. FADI WAZNI planned to have his community team examine the rehabilitation of school infrastructure in the sub-prefecture of Kolaboui.

In short, he calls the claims of the population of Kolaboui legitimate and is in favor of dialogue, permanent consultations and the creation of businesses.

It is in a festive atmosphere that the CEO of the Consortium has left the crossroads town of Kolaboui.

More in French on :