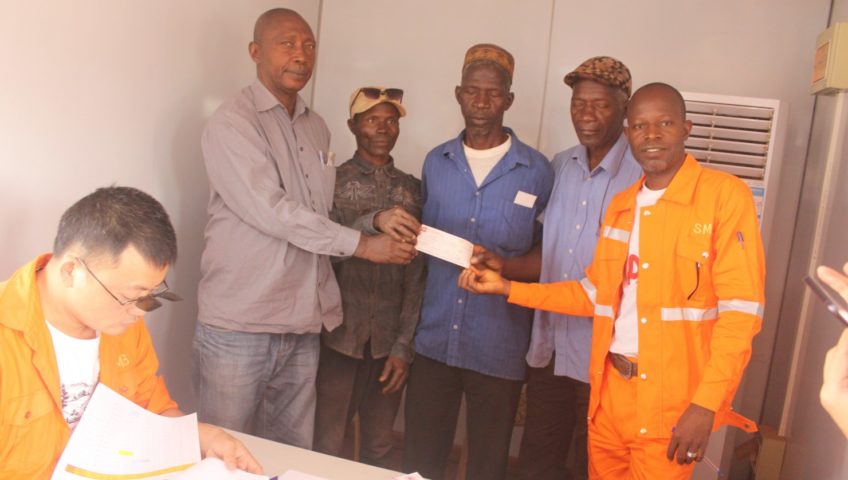 In accordance with the mining code and its compensation obligations, the SMB-Winning consortium on Tuesday, March 12, 2019, compensated the communities of seven (07) villages, located in one of its areas of intervention. The financial envelope allocated is nine billion sixty-four million nine hundred and thirty one thousand five hundred (9,064,931,500 GNF). It was in the presence of beneficiaries, a bailiff and local authorities.

The SMB-Winining Consortium is continuing its series of compensation payments to the local communities of Boké, following its numerous environmental and social impact studies, and the implementation of its PARC. This umpteenth compensation is aimed at the expansion of the exploitation zone in the permit 159 of the Alliance Minière Responsable (AMR) company, according to the inventory managers at the level of the SMB-Winning Consortium, Djiba Kéita.

After a training session on the effective management of funds, the community agents of the consortium provided helpful advice to the beneficiaries.

Receiving his due, Samba Djouma Koulibaly of Karifaya rejoiced “We will use this money to undertake income-generating activities, the construction of basic social infrastructure (school and sanitary), housing houses in hard, the development of new plantations, and reprofiling of our roads “.

Filled with joy, Souleymane Sylla of Fadougou first acknowledged the efforts made by the SMB in favor of communities before reassuring that these funds will be well used: “Buy a plot and make me a home. Thank you to the consortium for helping us improve our living conditions, such as reprofiling our roads, building community health centers, drilling; this allowed us to save ourselves from diseases related to the consumption of the waters of rivers, marigots and others. ”

Massively mobilized and provided with their identity documents, the beneficiaries of the individual and community amounts have in turn perceived their amounts from the hands of the director of micro achievements (DMR), Mamadouba Cissé, representing the local authorities.