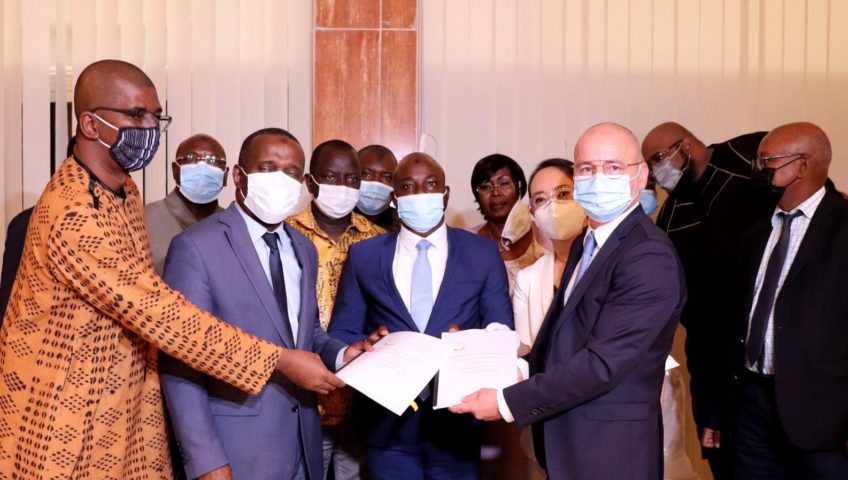 The Basic Agreement for the Simandou Blocks I and II Deposit Exploitation Project entered into force on July 3, 2020, and includes the general principles for the construction of rail and port infrastructure.  The rail and port conventions signed today have specified the conditions for the construction of the infrastructure concerned. The finalization of these two agreements completes the investment framework of the Simandou Blocks I and II project, and constitutes a solid basis for the advancement of the Simandou project by Winning Consortium. According to the general steps of the Simandou Blocks I and II project, WCS will build a railway line of approximately 600 kilometers as well as a multimodal port, which will allow  the exportation of iron ore out of Guinean territory. Beyond the many benefits in terms of direct and indirect employment as well as in increase in local income, this project will drive the economic development of Guinea on a larger scale. The Ministry of Mines and Geology estimates that direct state revenues can be estimated at over US $ 15.5 billion over the of the length of time of the project. Fadi Wazni, CEO of WCS, adds: “With a valiant heart, nothing is impossible. One year ago, our consortium has won the tender for the development and operation of blocks 1 and 2 of Simandou. This year, despite the difficult circumstances linked to the Covid-19 situation, we were able to negotiate with fairly large teams. (…) This project will take place over time. The people around the table will no longer be here when it reaches maturity. But the effects of this project will be felt for decades, maybe a century. After having allowed Guinea to become a major player in the exploitation and export of bauxite, our consortium will also support Guinea to strengthen its position in the exploitation and export of iron ore ”, underlined Fadi. Wazni

According to Mr. Sun Xiushun, Chairman of the Board of Directors of WCS, “Despite the health and economic crisis that we are going through, WCS is strictly adhering to the schedule established for the organization and progress of all work. We are confident in the ability of all of our teams to successfully complete this major project! Firmly committed to environmental protection and sustainable development, Winning Consortium will focus the efforts of all to build a world-class mining project, so that the Guinean people benefit from it,with mutual benefits for all stakeholders”. About Winning Consortium Simandou The Winning Consortium Simandou, consisting of Winning International Group of Singapore, Shandong Weiqiao Pioneering Group of China and United Mining Supply (UMS) of Guinea has obtained the right to mine the Iron Ore of Blocks I and II of Simandou in the procedure of international tender organized by the Guinean government. The three WCS members have been cooperating with Yantai Port Group of Shandong Province, China to develop bauxite mining in the Boké region since 2015, whose annual production and export exceeded 40 million tons in 2019.