Signature of milestone mining convention for a total investment of 3 billion dollars!

The government and the SMB-Winning Consortium signed a mining agreement on Monday, November 26, for the exploitation of bauxite, and the construction of a refinery and a railroad. The total investment is estimated at US $ 3 billion, as was stated at the headquarters of the Ministry of Mines and Geology in Kaloum.

In this mining agreement, it is stated that the construction of a 135 km railway line in the corridor extending from Boffa prefecture to Boké prefecture for the exploitation of new mining areas. This should open up the Boffa corridor and move bauxite to the Dapilon refinery and river port.

According to Fadi Wazni, chairman of the Board of Directors of the SMB Winning Consortium, the railway will provide Guinea with a world-class infrastructure because there is no economic development without infrastructure, he says. “The agricultural program will create jobs and make Guinea an agricultural power. The alumina plant that will be in the Boké special economic zone will create very significant added value and will propel Guinea into the industrial age, “he explained. 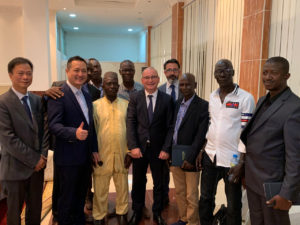 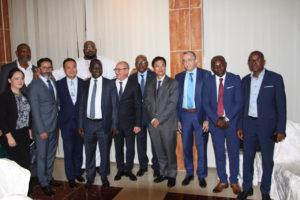 The Minister of Budget, Ismael Dioubaté, for his part, recalled that this signature reflects the political will of the Head of State Alpha Condé who, he said, from the beginning of his mandate indicated that mines should serve as a lever for Guinea’s economic development.

For Minister Dioubaté, this project will create enough jobs in the rural world which will help collect additional taxes. “The dream has become a reality,” he said.

“The other projects may have been about mining, but now we’re going into the industrialization phase. This is a good thing not only for the Guinean economy but also for international cooperation, “he said.

For his part, the Minister of Mines and Geology, Abdoulaye Magassouba said that these three conventions are perfectly in line with the new mining policy implemented by Pr. Alpha Condé since 2010. “They respond to urgent requests from Head of State at the place of the mining companies. It is first and foremost the transformation of mining products. Then, mines must be a real lever for transforming the national economy through their integration with the rest of the economy, “he said.

It is worth reminding that the Council of Ministers last week approved this integrated mining project that will probably allow, if it is realized, to increase the production capacity and the aura of Guinea on the Bauxite World Market, and will also inject some momentum into the development of local riparian communities.

The video in French : https://www.youtube.com/watch?v=8734JEN4Q2I&feature=youtu.be