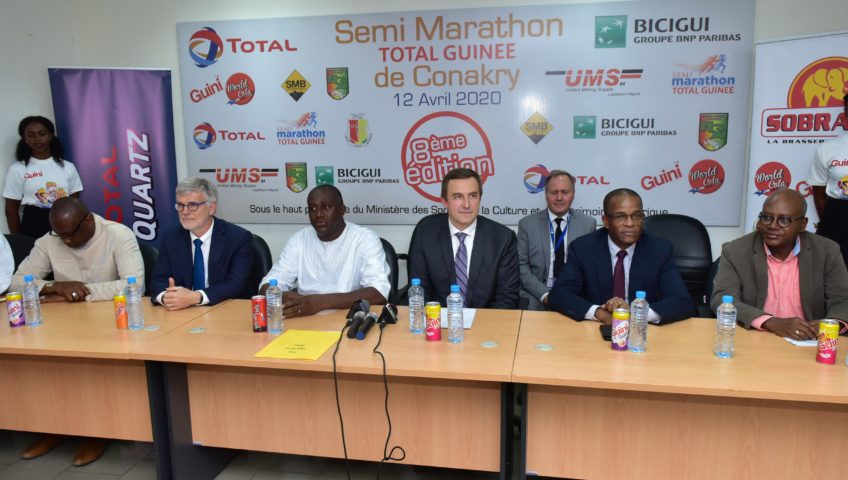 The 8th edition of the Conakry Half-Marathon will be held on April 12. The sporting event was launched on Friday February 14 at a press conference organized for this purpose.

In addition to the traditional partners that are BICIGUI and SOBRAGUI, two new partners have announced their arrival to support Total Guinea. They are the Mining Company of Boké (SMB) and the logistics company UMS.
In his speech, the General Manager of Total Guinea, Nicolas LISIECKI, justified the arrival of the SMB-UMS consortium by the appearance of the Conakry half-marathon: “It is a major event which takes more time each year. importance and which welcomes new partners. This year we are lucky in addition to the sponsorship of the Ministry of Sports, we have four private partners. Two, which we can qualify as historic, which are BICIGUI and SOBRAGUI, and two new companies which are UMS and SMB who are very enthusiastic about joining us to organize this event. These partnerships are necessary because the event is growing. In 2012 we had 350 runners for the first edition, 8000 last year as said and we are still aiming higher this year with 9000 participants. ”

The athletes, according to Mr. LISIECKI, will be divided into three races, it is the half-marathon which is the 21 km and the other two which are the 12 km and the 5 km.

“Total Guinea carries values ​​that are: security, respect for others, tastes of performance, forces of solidarity and the pioneering spirit. These values ​​find their meaning in the Conakry half-marathon. This sporting event must bring the actors to surpass themselves. The medical visits which are the key to registration are also an opportunity for participants to benefit from a medical check-up which makes it possible to detect certain pathologies. Eight Total stations are important to this organization because they are part of the refueling points. All this to make this event a hydrated celebration. For my part, I will be there to at least participate in the 5km, ”added the Director General of Total Guinea.

The partners of this event say they are happy to participate in a meeting during which the spotlights are focused on Conakry. Hence, according to Dénis RUBRICE, Director General of BICIGUI. According to him, its banking subsidiary is proud to participate alongside partner companies in this event, which is the Conakry half-marathon.

‘’ Of course, our primary mission is to finance the economy. This is our primary vocation, but beyond that, we feel that we also have a social responsibility. We believe that with committed partner companies, with customers who share our convictions, with the bank’s 350 employees, we can make a difference and have a lasting positive impact on society. We have been proud from the start to associate our image with the growing Conakry half-marathon, ’’ said the banker.

In his speech, Ismaël Diakité, said that the SMB-UMS consortium did not become a partner of Total Guinea for the half-marathon by chance: “It is with great pleasure that the SMB-UMS consortium agreed to associate with the 8th edition of the Total Guinea half-marathon. It is no coincidence that we agreed to be a partner of choice for this event. First, beyond the sporting aspect, there is the health and safety aspect which is a basic logic in our mining activities and especially in the logistics sectors. We value the health of our employees, our partners in the field from the communities. So it is with real pleasure that we join the Bicigui-Sobragui-Total club and expect to be there and stay there. ”

As for the president of the Guinean Athletics Federation, Ansoumane Soumah, he recalled that it has been 8 years in a row that its structure has supported the Conakry half-marathon.
“I hope this will continue and I would like to reassure you in the end that all the arrangements are made by the Guinean Athletics Federation for the success of this competition which is now open,” he said.

For his part, the Directeur National des Sports, Lansiné Kabassan Keita, welcomed the security surrounding the event: “Since last year, our department has been accompanying the international half-marathon. We have made it international by inviting athletes from foreign countries and we are also looking forward to the security part. At the level of the Ministry of Sports, I reaffirm and I also reassure the colleagues here present that the department will spare no effort for the success of this 8th edition. ”