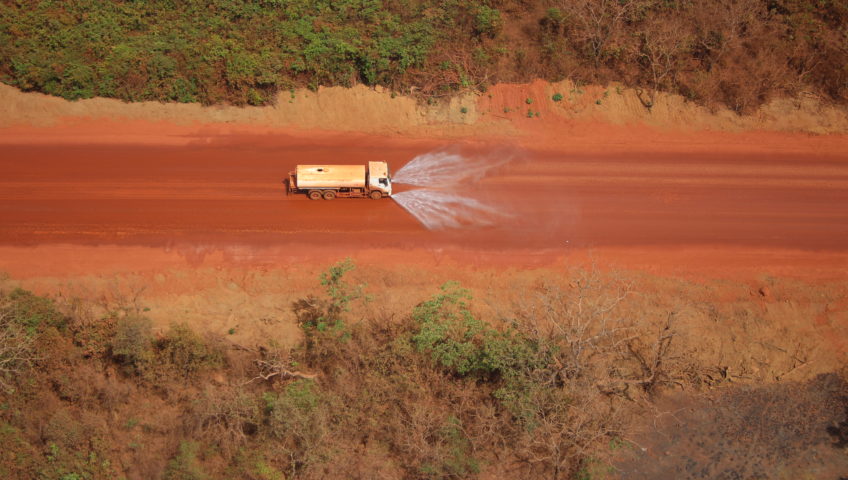 Conakry, Republic of Guinea, September 12, 2018 – Société Minière de Boké (SMB) is strengthening its sustainable local development initiatives and is committed to the AGREM program (Improvement of the Governance of Mining Royalties).

The Société Minière de Boké (SMB) is engaged today in the program of Support to the improvement of the governance of the mining royalties (AGREM) by the signature of two contracts of partnership up to 100 MGNF to reinforce its initiatives of socio-economic and cultural development in Boké.

The first contract provides for the development of a market gardening area of ​​1.5 ha in the village of Kogbala (200 inhabitants), in the Rural Municipality of Tanènè (Prefecture of Boké), located at the heart of the operating license of the company Alliance Responsible Mining (AMR), partner of Société Minière de Boké (SMB).

Established on a site until then isolated and little valorized, even though the area is irrigated throughout the year by a river, the project provides an annual production of some 14 tons of tomato, okra, eggplant, chilli, corn, cassava … destined for the markets of Kamsar and Boké as well as the canteens of some schools and neighboring companies.

In addition to generating income, this project will provide a full membership to a group of 20 women that AGREM experts plan to train in agricultural techniques, management and marketing, with a view to sustainable empowerment. Prefectural and regional technical services will be associated and will benefit from training while placing the project in regional development plans.

The second initiative will be implemented in the heart of the city of Boké, on an emblematic site of high historical and cultural value: the current Museum of Boké, starting point of the explorer René Caillié for Timbuktu (1828). The museum houses an administrative building dating from the colonial period (1878) and the chief place of cultures Baga, Nalou, Landouma and Mikiforé.

Beyond the preservation of this heritage, the project plans to revitalize the site through its transformation into a socio-cultural and educational space for the inhabitants of the city who currently have little recreational and educational infrastructure open to trade and intergenerational communication. Rehabilitation works and new developments are planned, as well as the setting up of an animation structure integrated with the youth of Boké. The project will be managed by the managers recruited for this purpose within the AGREM program and supported by the internal expertise of the SMB.

The partnership contracts were signed between the SMB and the Guinea Chamber of Mines (CMG) for the market gardening project and between the SMB Foundation and the CMG for the sociocultural and educational project at the Boké Museum. The CMG is indeed part of the AGREM program, an initiative developed and supported by the United Nations (through its UNDP and UNCDF, respectively United Nations Development Program and United Nations Capital Development Fund) and non-governmental organizations. French government, Charente Maritime Cooperation (CMC), working for more than 20 years in Guinea.

Under the joint supervision of the Ministries of Mines and Geology (MMG) and the Administration of Land and Decentralization (MATD), the AGREM program – planned for a period of five years – aims to support the implementation of fair, transparent and responsible practices in the management of mining royalties. Two prefectures benefit from this support, Boké and Boffa (totaling 18 communes concerned), prioritized because they are currently experiencing an unprecedented mining boom.

Frédéric Bouzigues, Director General of the SMB, commented: “By committing ourselves to the AGREM program, we not only want to strengthen our local development actions for communities bordering our mining activities, but also to work for mining boom integrated into the sustainable and inclusive development of all local communities in Guinea. “