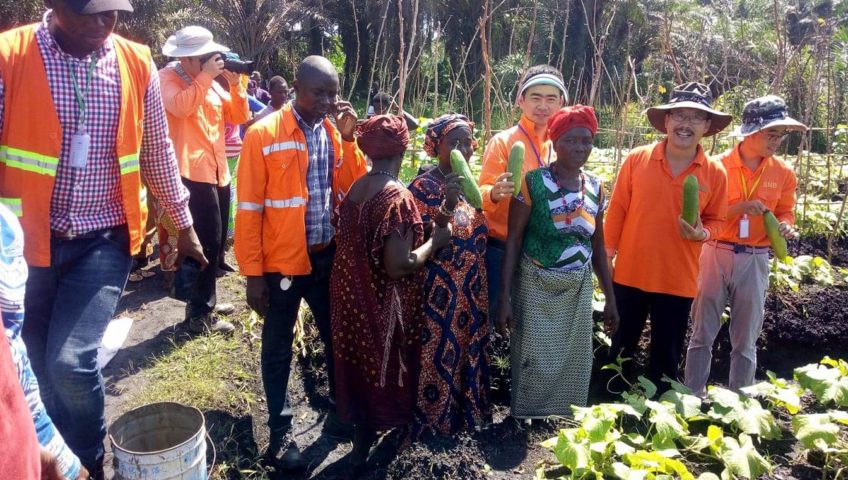 A delegation from the SMB Winning Consortium visited on Wednesday, October 17, 2018, the plains containing vegetable gardens of two women’s groups composed of 100 women, from the Sougué Boungi district in the sub-prefecture of Kolaboui to 22 km from the capital of the prefecture of Boke.

Led by the Director of Community Relations of the SMB, Mr. Wu Qiong, said delegation had come to see the level of development of the four hectares out of eight to be valued by the NGO-Evolution, implementing partner of the pilot project .

For the record, the mission in the company of the communities, had the honor to launch the third operation of the harvest of an area sheltering the hybrid cucumbers.

For the training officer, Mohamed Soumah, “this project has a positive impact on the socio-economic life of the population from production to marketing.”

Congratulating the consortium for this concrete act, Mr. Soumah added his intervention: “Training women on farming techniques, helps manage the risks of diseases related to the use of phyto products and organic fertilizer to preserve products and control the composting system as a whole. ”

For her part, the president of the women of Sougué Boungni, Mrs. Fofana Fatou Dansoko said: “We have clung to this income-generating activity to provide for our needs and assist our husbands in the care of our respective families. In other words, we will say that the Consortium knew where to set foot. ”

She requested further support from SMB for the protection of the area against ruminants by the time of the wandering of the animals in the village.

Words supported by Aïssatou Somparé who works for the radiation of his locality with the realization of basic infrastructures.

“We are pleased to see the pilot project flourish in the village of Sougué Boungni. We salute the courage, the seriousness and the determination of the women of the host community. In terms of gridding, the Consortium will make a small effort to help women achieve their development goals, “reassured WBU Community Relations Director Wu Qiong.

In his words, he promised the very forthcoming construction of a primary school in the district of Sougué Boungni.

This, he adds, “To prevent the children of the village regularly cross the mining road to go to Dabankou for studies.”

In short, the populations of the host community appreciate the initiative of the SMB which, according to them, works for the well-being of the residents of its areas of intervention.