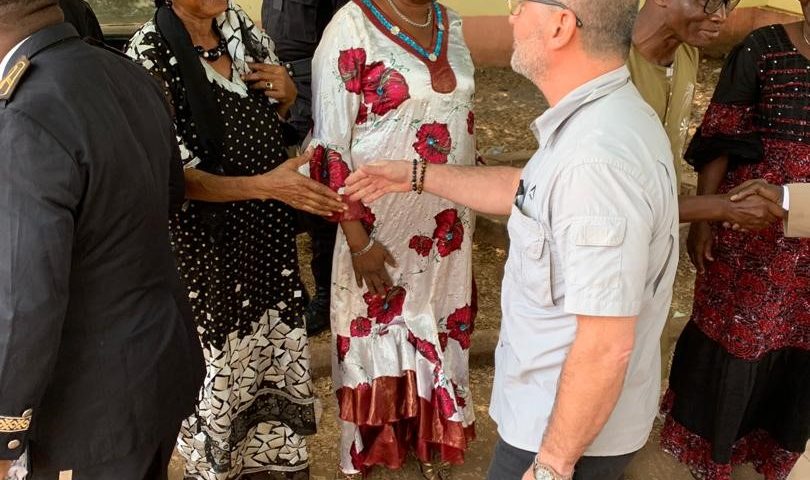 In order to strengthen the economic power of the women of Boké, the Chairman of the Board of the SMB, Mr. Fadi WAZNI has just granted a financial envelope of one hundred and seventy-six million (176,000,000 GNF) for revive the Mutuelle Financière des Femmes Africaines (MUFFA) in the prefecture of Boké.

After more than three years of unsuccessful efforts to revive their MUFFA, the women of Boké have just received a financial package of 176 million Guinean Francs from Mr. Fadi WAZNI, President of the Board of Directors of the Company Boké Mining. The presentation of the check took place on Friday, March 8, 2019 in the presence of HE the Minister of Information and Communication, Amara Somparé who presided over the ceremony and who symbolically presented this check to the beneficiaries, after having received hands of representatives of the SMB Winning Consortium.

The ceremony was held at the Boké Regional Youth House in the presence of local authorities, officials of the SMB-Winning Consortium, heads of women’s groups and youth associations in the beneficiary country.

In 2016, the Muffa de Boké, through the subscription of women members, put 24 million bank account open to AfrilandFirstBank like all muffa in the region. except for the koundara where the state offered 100 million starting funds, all the muffa in the region had trouble getting started. That of Boke even worse because the death of the former president of women left a void. Since then, a fragile unity between the women has not allowed to continue the actions of internal mobilization of bottom, nevertheless an obligation to be supported by the State as in the other cities of the country.

This is the situation that Chairman Fadi Wazni has just faced, responding to the heartwave of the women of Boké for the revival of the Muffa, supposed to participate in the empowerment of women, as described in this year’s theme. this 08th of March 2019.

For the representative of the President of the Board of Directors (CA) of the SMB, Almamy Youssouf Coumbassa, the ambition is to strengthen female entrepreneurship in rural areas and to encourage economic interest groups through the development of income generating activities.

Receiving the check, the MUFFA President of Boke, Mama Yèrèssa, visibly pleased, said: “We are very satisfied with the boss of the SMB who has materialized his promise to the poor women we are. We promise to invest this fund in income-generating activities, in agriculture, market gardening to boost the development of our locality. We will demonstrate dynamism, solidarity and unity around this financial capital that will allow us to end poverty and malnutrition … ”

In the opinion of Regional Governor Brigadier Siba Sévérin Loholamou, “Women need to be supported by committed structures and companies. That is why we say thank you to Mr. WAZNI and his collaborators for this mark of solidarity, trust and good cooperation. The challenge is before you. Organize and hear yourself to overcome the obstacles and pitfalls in your path. We are waiting for you at the rendezvous of 2020. Make good use of the funds available to you because the future and the development of your children and that of Guinea depend on it. You will understand that the presidential initiatives in the direction of development and national unity are running for the happiness of Guineans … ”

Lastly, this amount is added to the sum of 24 million GNF from women’s contributions in 2016.