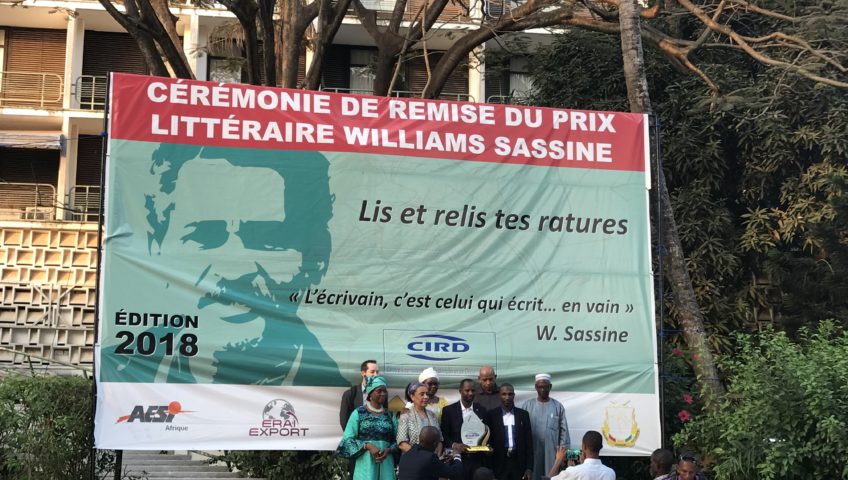 This Friday, February 9, commemorative date of the disappearance of the great Guinean writer Williams Sassine, the International Center for Research and Documentation (CIRD) proceeded to the awarding of prizes to the winners of the Prize bearing the name of the illustrious man of pen. It was in a receptive hotel of the capital Conakry, under the honorary presidency of the Minister of Sports, Culture and Heritage, Bantama Sanoussy Sow.

This is the first edition of this award, which the PCA CONSORTIUM SMB WINNING has supported, which earned him to be named the sponsor of the ceremony. The SMB WINNING CONSORTIUM Foundation, whose promotion and promotion of Guinean culture is one of its prerogatives, has responded “present” to this initiative. 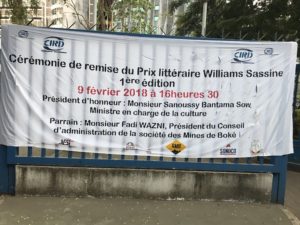 Numerous personalities from the Guinean and international literary world were present at this ceremony where the memory of the initiator of “La chronique assassine” was recalled by testimonies as interesting as they are alive.

The founder of the CIRD, Safiatou Diallo, in her welcome address, recalled that Sassine deserves this honor, which is awarded to her with this award bearing her name. His center is firmly in support of the works of the spirit and the promotion of literature. “This literary prize aims to encourage writing, to value Guinean and African literature, while paying homage to the author whose name it bears,” she said.

After the speech of the Minister of Culture, the president of the Association of Writers of Guinea, Lamine Capi Kamara, welcomed this great initiative, and took the opportunity to apostrophise the authorities of this country, so that they finally deign to celebrate Guinean values ​​in their lifetime, to break with this Guinean mania to celebrate people only when they gave up their souls, around their coffin, at the People’s Palace, during a symposium.

Professor Djibril Tamsir Niane, who was the headmaster of Sassine at Donka High School, also testified about the man. He congratulated the initiators of this award and saluted the widow and the children and parents of Sassine present.

Another testimony is that which was considered as the twin of Williams Sassine, the novelist Tierno Monenembo, grand prize of the Francophonie, which in turn challenges the Guinean authorities for the names of streets, squares and institutions School and university bear the names of Guineans who have distinguished themselves in the past as well as in the present.

The journalist and former minister, Justin Morel Junior, will end the series of testimonies, recalling that it is during a broadcast on National Television, on Sassine’s return from exile, that he will inspire the author with the title from his novel The Zero is not anyone …

The jury of the prize, chaired by the Ivorian Véronique Tadjo, literary prize of Black Africa 2005, has received a total of 64 news, from Guinea and elsewhere; texts from 10 to 20 pages, ranging from a quote by Williams Sassine: “We have so many realities that we do not write with the imagination […] Just open the door, just make a hundred meters in the street so you can see things that defy the imagination. ” Among the members of the jury are the boss of the Le Souleymane Diallo press group, the French journalist Olivier Rogez, the Guinean journalist Hawa Camille Camara, the Guinean filmmaker Gahité Fofana, and the CCFG librarian, Laïla Diallo.

It was the young Alpha Alimou Sow who won the first prize consisting of a check for 500 euros and a stay in Abidjan to attend the International Book Fair in May.

A collection of four new awards and a dozen other news among the best will be published in collaboration with Harmattan Guinea.

Note that this activity was located within the “Conakry Captale Mondiale du Livre” initiative(Conakry world book capital), whose Commissioner General, Sansy Kaba Diakité, was present at this ceremony.

In the same context, the announcement was made of a conference on the latest book by Véronique Tadjo and the first by Olivier Rogez, hosted by Bachir Tamsir Niane, assistant at the Faculty of Letters, Saturday, February 10, 2018, to from 10 am at the University of Sonfonia.