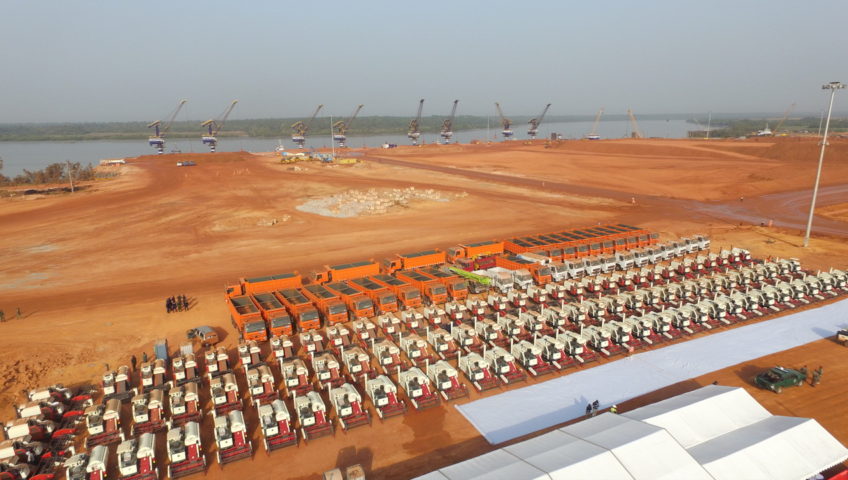 Local content has always been at the top of the concerns of the SMB-Winning consortium, UMS, for example, is more than 95% Guinean, and the choice of our subcontractors is almost exclusively for Guinean companies.

The President of the Republic Pr. Alpha Condé made this Tuesday, January 9 a visit to the mining port of the consortium SMB WINNING, located in the sub-prefecture of Kolaboui, prefecture of Bokė. The Head of State had come to receive agricultural machinery bought by the Guinean government for the development of the agricultural sector.

In total, more than a hundred combine harvesters and 300 hullers were transported from China and stationed at the port of Dapillon by the consortium SMB WINNING, it was found on the spot. It was around 11 am that the helicopter carrying President Alpha Condé landed at Dapillon, the second mining port of the Bokė Mining Company (SMB).

When he got off the plane, he was greeted by the governor and the prefects of the administrative region of Boké before treating himself to a walkabout. The official speeches were preceded by artistic performances of folk troupes of Katounou and Sogoboly.
In his welcome speech, the sub-prefect of Kolaboui, Youssouf Manet thanked the President of the Republic for his desire to boost the agricultural and economic development of Guinea.

On behalf of the SMB-WINNING consortium, Mr. SUN, his General Coordinator, said the dumping of these threshing machines from China is a way for their group to participate in Guinea’s agricultural and economic development. The consortium wishes to emphasize the importance of local content in a development strategy.

In receiving this equipment, President Alpha Conde first gave a brief overview of the mineral and agricultural potential of Guinea. According to Alpha Condé, more than 60 percent of Guineans are farmers.

“Thanks to the support of the government, we will accompany modern agriculture. But, it is not enough to cultivate, it is also necessary to make the processing of local products on the spot, “said the head of state.

Other topics developed by Prof. Alpha Condé, it is the problem of youth employment and the empowerment of women. According to the President, these machines will be made available to women and young people to fight against unemployment. It has also invited mining companies operating in Guinea to respect the local community by prioritizing local jobs, local outsourcing and above all to support farmers.

Local content remains at the heart of the consortium’s concerns.