This morning was held the Official Inauguration of our new head offices in Tombo 1, Kaloum, with His Excellency the Minister of Mining and Geology, M. Abdoulaye Magassouba. We were honored with our guests’ presence, and we thank them again for being there. 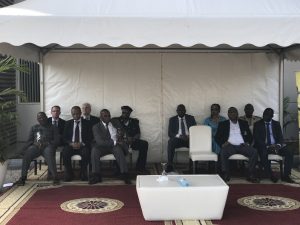 These new offices, also the new head offices for the SMB (Société Minière de Boké / Boké Mining Company), are locate in Tombo 1, Kaloum, and are the result of 20 months’ work. As required in the current laws, all mining companies must build their headquarters in Guinea in a 3-year span after obtaining their mining licence, and the SMB was sure to deliver in that regard. It is also compliant to the current Health and Sefety norms and offers enough office space to host all the consortium’s employees who need to work from Conakry. Without a doubt, these optimized work conditions will allow the aforementioned consortium to stamp its print on the country’s Economic History. 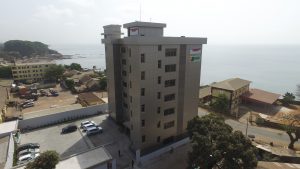 SImple and efficient, the ceremony of inauguration started with a speech from the Board Chairman of the SMB, Mr. Fadi WAZNI. He first thanked the Guinean Government and its support in the creation of the mining company and the consortium, underlining the fact that the project now earns the Guinean country over 100 billion GNF monthly.   He then thanked the people who “welcomed” his project “with open arms”, and bring him “unfailing” “moral support”, with the understanding that the change imposed by the mining company would also bring thousands of direct and indirect employment opportunities for their fellow countrymen. He finally thanked the entire consortium staff for the provided effort in realizing the projects of the latter. 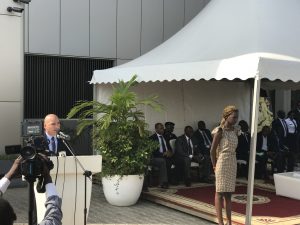 HEMMG proceeded with his speech reminding he legal obligations of all mining companies and highlighting his trust in a long-term partnership between the Consoritum and Guinea.

The ceremony continued with the unveiling of the commemorative plaque, souvenir pictures and the visit of the offices from the inside. 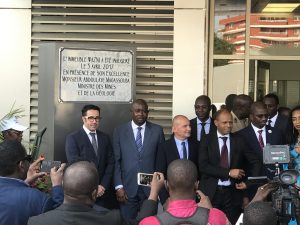