UMS INTERNATIONAL Unclassified TGH Plus Industries – Inauguration: new base in partnership with UMS in Kaboyé 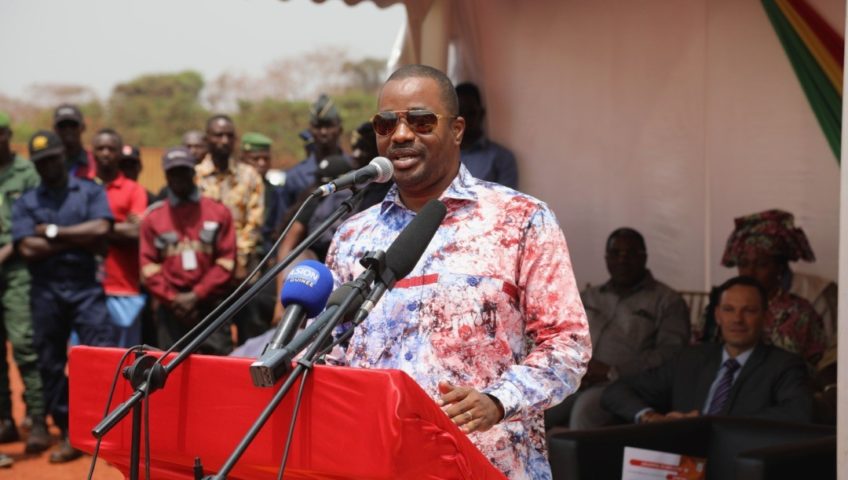 TGH Plus Industries – Inauguration: new base in partnership with UMS in Kaboyé

The second logistics base of TGH Plus Industries (exclusive Renault Trucks distributor in Guinea and Sierra Leone) was inaugurated yesterday, Saturday, March 02, 2019, in the Kaboé mine, under the sub-prefecture of Tanènè, in the prefecture of Boke. The inaugural ceremony of this maintenance and repair center was chaired by the minister of industry and SMEs, personal adviser to President Alpha Condé, Tibou Kamara, reports the special envoy of Guineematin.com in Boké.

With relationships that are more than 15 years old with UMS (a Franco-Guinean company and shareholder of the SMB Winning consortium), TGH plus Industries (a Guinean company) has been working since 2016 to transport bauxite from mines to consortium SMB Winning (the leader of the Guinean market for bauxite). The exclusive distributor of Renault Trucks in Guinea and Sierra Leone ensures the availability of trucks, carrying out monitoring, control and maintenance operations in its workshops.

TGH plus Industries also provides a wide range of complementary services that include: preventive maintenance full, driver training and maintenance personnel, vehicle tracking and a stock of spare parts available full time. And it is in this context that he has just inaugurated his new logistics base for maintenance and repair in the Kaboé mine, in the sub-prefecture of Tanènè, prefecture of Boké. The inaugural ceremony was enhanced by the presence in Kaboé of several ministers of the current Guinean government, the representation of the French Embassy in Guinea, the Lebanese ambassador to Guinea and the senior vice president of Renault Trucks International.

In his welcome speech, Oumar Kalabane, the mayor of the rural commune of Tanènè, expressed the delight of the citizens of Tanènè for the establishment of this more international TGH logistics base in their locality. A logistical base which, explains Oumar Kalabane, is added to the river port of Katougouma whose laying of the first stone and the launching of the departure of the first ore boat in 2015 had been the subject of President Alpha Condé’s personal trip to the region. of Boke.

“The presence of these workshops will facilitate the maintenance of mining equipment and reduce multiple panes that can negatively affect the momentum of production. It will also increase the bauxite production which, in turn, will not only implicitly increase the incomes of our fellow citizens through local content, but also those of the partners, the State in general and Boké in particular . As a testament to their joy, the citizens of Tanènè charge me to thank TGH plus for his efforts and reassure you of their involvement in safeguarding this jewel and other assets of the consortium SMB Winning, “said Mayor Oumar Kalabane.

“We took the initiative to build this place that you have in front of you, with the five flags representing Guinea, France, Renault Trucks, UMS and SMB, to symbolize the friendship between men and peoples. And, we call it place of friendship … The TGH workshops plus Kaboé-Boké industries are an example of participation and commitment of young people from Guinea in transport solutions, for the mining professions in our country. Youth employment is a reality here, with more than 120 workers (men and women graduating from vocational schools and Guinean universities), in an intense activity 24 hours a day; 7 days a week since 2015, “said Dr. Alimou Yali Bah.

Moreover, the general manager of TGH plus industries has praised the experience of Renault Trucks International which, he argues, the global presence in mining trades since 1960 is proven. “It has generated efficient, efficient and cost-effective transport solutions that amply demonstrate the brand’s commitment to actively participate in the development of trucking in Africa and other regions of the world … Renault Trucks K unique assets, develop a payload of up to 150 tonnes of ore transported by trips, “said Dr. Alimou Yali Bah.

Speaking, Olivier Saint Meleuc, Senior Vice President of Renault Trucks International, said the inauguration of this second TGH plus logistics base marks the culmination of three years of efforts and partnerships, as well as a new milestone in the development of mining activity in Guinea.

“Guinea is a country where Renault Trucks feels good. It is emblematic of how we imagine our development in Africa, a dynamic region, a favorable environment, with partners who are keen to increase the economic activity of their country … And, I want to mention of course TGH plus, our partner for more than 10 years, but also UMS, his client; and, of course, the mining company Boké (SMB), “said Olivier Saint Meleuc, while recalling the quality of the equipment and services of Renault Trucks.

The Senior Vice President of Renault Trucks International also praised the qualities and merit of his partner and general manager of TGH plus which, according to him, was able to hoist Renault Trucks to the first place in Guinea. “Renault Trucks covers 70% of the needs for trucks for the transport of hydrocarbons and for mining activities,” said Olivier Saint Meleuc.

For his part, Thierno Tall, Deputy Director of Operations UMS, said that “today’s ceremony perfectly reflects the transformation underway in the Boké region since 2015. And, the exploitation of bauxite, through the action of the SMB consortium of which UMS is a shareholder, has played a major role in this evolution which has made Boké the new economic heart of Guinea … Like any large company, UMS regularly works with trusted partners like TGH plus, with whom our relationships are more than 15 years old.

With the service of Renault Trucks solution, says Thierno Tall, “the more than 120 employees of TGH plus ensure the maximum availability of our trucks on behalf of the SMB Winning consortium, by carrying out monitoring, control and maintenance in its workshops “.

On behalf of the President of the Republic, Tibou Kamara, Minister of Industry and SMEs, called the inauguration of the TGH logistics base more exceptional event in Boké. “The President of the Republic, Pr Alpha Condé, since he came to power a few years ago, embarked on a personal challenge that was also a political vision before his rise to power, to transform Guinea and to change the living conditions of Guineans. Seeing this beautiful building, if the bet is not won, we can say that it is about to be won. It is true that in Boke, progress is more advanced than elsewhere. It is true that in Boke progress is visible, sensible, significant; but, all of Guinea has changed all these years … What Professor Alpha Conde has brought the most to Guinea is to have confidence in his potential. Never in the economic history of our country, so many investors have rushed to our door … I am very happy that the partnership between Renault Trucks and our fellow countryman Yali Bah, is cited today as an example of cooperation between investors who believe in our country and compatriots who have talent. It is true that today it is the first authorized distributor of Renault Trucks. This is to his advantage and to his personal honor; and, it helps to improve its reputation in the business world … But, it is also an honor for our country whose image and reputation are improving, “said Tibou Kamara.

Note that the inaugural ceremony of the logistics base of TGH plus ended with a guided tour of the Minister of Industry and its continuation in maintenance workshops and repair, culminating in a lunch.