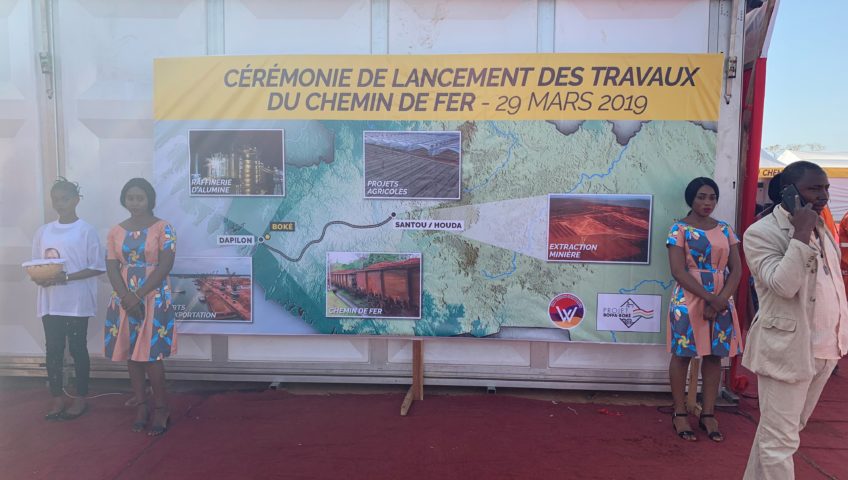 Consortium – PBB – launch of construction works for the Boké-Télimélé railway

President Alpha Conde has launched this Friday, March 29, the construction work of the railway Boké-Telimélé (130km) by the SMB Winning Consortium. Its cost, US $ 1.2 billion will be borne by the shareholders of the SMB.

It will be built in a corridor stretching from the Boffa region to the Boké region and will connect the Dapilon terminal of the Boké port and the Santou and Houda deposits to the Telémélé prefecture.

It is composed of many structures including three tunnels. This railway axis will open up new mining areas and transport bauxite to the port of Boké.
A team of a dozen people including several engineers will be dedicated to the overall project supervision that will enable many Guinean companies to work on a major infrastructure project and create several thousand jobs.

As a first step, the use of the railway will be exclusively devoted to the transport of bauxite by the SMB Winning consortium. In the long term, its use could allow other mining companies to benefit from it before including it in the Guinean national rail network in order to make possible the transport of conventional goods and passengers.
As part of a project of national interest (PIN) the consortium SMB Winning is also committed to achieving an agricultural growth corridor based on a set of agricultural projects along the railway track. The 2.5 kilometers on both sides of the railway have been classified as projects of national interest and will allow the SMB Winning Consortium to develop several agricultural projects in collaboration with the National Agency for Rural Promotion and the Agricultural Council. (ANPROCA).
Sun Xiushun, commander-in-chief of the SMB Winning Consortium and Honorary Consul of Guinea in Singapore, reaffirmed his company’s commitment to continue its efforts to contribute to Guinea’s economic development before returning to the benefits of the project. “The construction of this new railway will guarantee even more stable exports of Guinean bauxite to the world market. This project will not only increase mining activities in the regions of Houda and Santou, but also mark the beginning of a modern railway network in Guinea, even in West Africa.

At the same time, we will also enable local communities, especially women, to develop agricultural projects. We are also planning to build an alumina plant very soon, with an annual capacity of up to one million tonnes. All of these projects will train a large number of elites in technology and management. This rail project will double production and save energy, “he said.

Abdoulaye Magassouba, Minister of Mines and Geology, for his part, recalled that before 2019, the construction of the last complete railway line from a mine to a port in Guinea dates from 1974, more than 44 years old.

“Since its creation in 2014, the SMB-Winning consortium has invested around US $ 2 billion in its extractive and port activities in the Boké region. This has allowed Guinea to increase its production and export of bauxite from less than 20 million tons to 60 million a year and thus becoming the third largest bauxite producing country in the world. This railway, whose work was launched today, will make a significant contribution to Guinea’s sustainable development. New deposits must be mined in 2022 with production of up to one million tonnes per year, “said Abdoulaye Magassouba.
Officially launched the work of the railway SMB Winning, the President of the Republic did not fail to express his satisfaction before calling the mining companies to work more on the accompaniment of riverside communities.
Note that the turnaround time is three years.